Agia Varvara Park is Drama’s trademark and it’s been ranked among the 60 best parks of Europe, according to the European program Culture 2000.It occupies an area of 6 acres in the heart of the city and it was named after the homonymous church of Agia Varvara.

According to tradition when the Turkish conquerors tried to take down the church and built a mosque in its place, the temple was covered by water and thus saved.

The residents believed it to be a miracle and for this reason, to this day, to honor the memory of Agia Varvara on December the 4th they light up extemporary boats and let them on the lake surface, setting a unique scenery just outside the hotel. 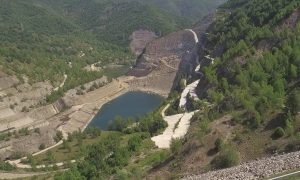 One of the biggest hydroelectric tasks ever made in the area of Drama. Works began in 1983 by constructing the diversion tunnel of the dam. Today there are two dams operating, one in Thesauros and one in Platanovrisi, where two lakes have been formed respectively. The Thesauros dam is 175m high, considered the biggest in the country, and the lake surface is 18 sq. km.

Distance from the Hotel: 61km 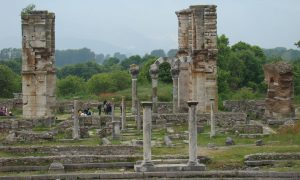 The ancient city of Filippi was built on the swamp selvage that covered the northeastern part of Drama’s valley and it’s the most important archeological site of eastern Macedonia. The first residents were colonists from the island of Thasos, that in 360 B.C. founded the colony of Krinides. The city reached its peak during the Hellenistic era.

The ancient theater is also a very important site. Its current form is a result of continuous structural reshaping, that represent different stages in the history of the city. It is located at the northeast hill of the Acropolis and it leans upon the east wall.

n this very spot, in the waters of river Zigaktis, the Greek woman Lydia was baptized the first Christian of Europe. People from across the globe travel here to visit the holy ground, whilst some of them choose to be baptized. The temple that stands here is quite impressive, as it is covered with stained glass, mosaics, gold and marble. It is a peaceful spot just outside Filippi, surrounded by green, that is worth visiting!

Distance from the Hotel: 26km 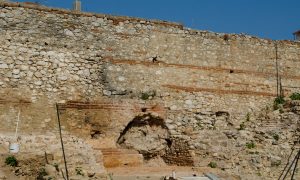 Towards the end of classical or the beginning of the Hellenistic era in the area of Drama a small town was founded, whose residents grew vines and worshiped Dionysus, in a special sanctuary. The town was active during the Roman and the Byzantine times but was taken over by the ottomans in 1371.

By state decision the Byzantine walls of Drama were declared a “historic landmark” in 1962. They are spread around the city and you might even see parts of them in private house gardens.

The sanctuary is located in an area called “little tomb”, 2,5km outside Kali Vrysi and is the dominant figure in the valley of Aggitis river.

This fine masonry structure, is a unique building specimen of historic times for the prefecture of Drama. Using other findings as guides, scientists date the sanctuary somewhere between the end of 4th century B.C. and the beginning of 3rd century B.C.

Distance from the Hotel: 24km